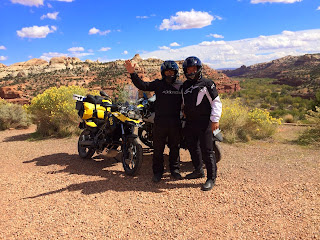 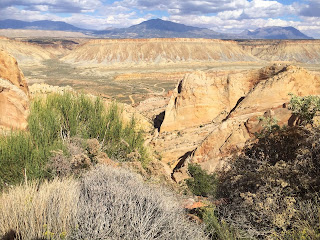 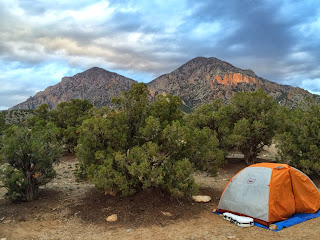 After we packed up and hit the road we decided to moto all the way to Bryce Canyon and look for some breakfast along the way. That turned out to be a good idea since nothing was open until 10:00am anyways. We finally stopped in for breakfast at a little restaurant off the 12 somewhere between Bryce Canyon and Boulder Utah.

With a full stomach our plan was to take this little road called the Burr Trail out of Boulder and head down toward lake Powell. That was one of the best decisions we made.

The Burr trail takes you down winding roads, through deep red canyons and across open desert with rock walls towering overhead. I was in awe most of the ride. Then we took a dirt road the rest of the way to Bullfrog where we were going to camp.

Unfortunately the government had a different plan. Because of the funding fiasco going on in Washington right now, all federal parks are closed, including lake Powell and our camp site.

Instead we headed up into BLM land and found an even better campsite on top of a mountain. Sometimes life is like that... You don't get what you want only to find there was something better waiting for you to stop throwing a tantrum.

I have so many great photos of today's ride. It's not fair to just post one or two, but for now you'll have to settle for these.
Posted by Unknown at 7:23 PM